Patrick Michael Whittle is a freelance journalist and writer, originally from the North Island of New Zealand.

After many years living and working in such exotic locations as Oman, the UAE, Kazakhstan, southern China, and Oswaldtwistle in northern England, he is now based in Wellington, New Zealand.

In addition to working as a print journalist and sub-editor, he has been a tour guide, a dock worker driving 50-tonne ‘straddles’, and a teacher/lecturer (at schools, universities and at a zoo school), and was a volunteer firefighter during the 2011 Christchurch earthquakes.

Academically, he has graduate and post-graduate qualifications in linguistics, education, journalism, and philosophy, and has published in a number of academic journals.

More recently, he has written popular science and opinion pieces for New Zealand media publications and international websites (such as the Genetic Literacy Project), as well as editing a monthly start-up newspaper, The Senior Citizen.

Having co-written (with Dr Doug Campbell of the University of Canterbury) an academic text on ethics, conservation and genetic technology in 2017, he is now writing his first novel, a speculative fiction thriller, centred on the concept of species de-extinction.

Away from writing, he is a keen off-road runner, cycle tourer and tramper. 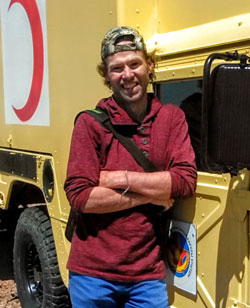