Enjoying (but not feeding) the Clown of the Mountains

It’s not what you expect to see in the garden of your holiday bach first thing in the morning - a gang of hooligans trashing the place. 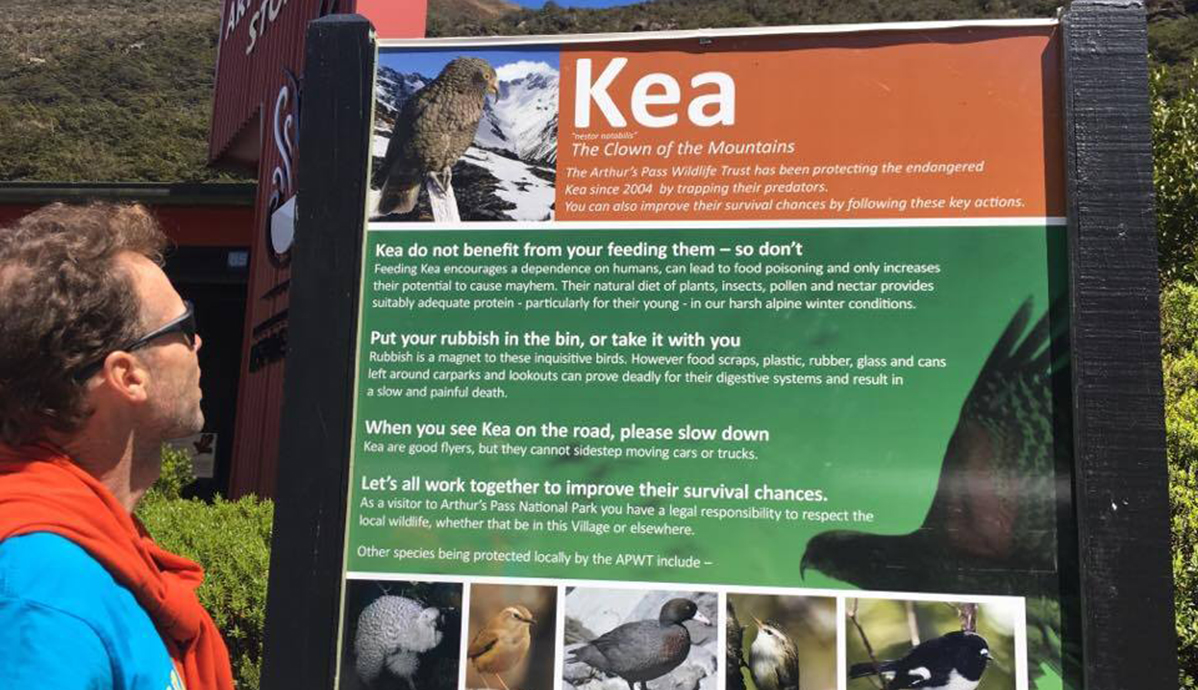 And these weren’t out-of-towners doing a spot of weekend hell-raising up in the Southern Alps village of Arthur’s Pass; these were definitely local bad boys, with a well-known reputation for mischief and mayhem.

I opened the door and scuttled out, shouting, “Get out of it!” - and scuttled back in just as quickly when the leader of the pack caught me with his beady eye, and hopped rapidly in my direction.

The so-called ‘troublemakers’ were, of course, some of the village’s best-loved tourist attractions - a flock of half a dozen kea, the large olive green Alpine parrot found only in the South Island high country.

And although the kea is more inquisitive than aggressive, its long curved beak and large claws are slightly unsettling when you’re wearing nothing but your bedtime undies - hence my rapid retreat back indoors. Plus, in my defence, it was still chilly outside, with the early morning sun yet to reach the village, nestled deep below the high peaks of Arthur’s Pass National Park.

Nicknamed ‘the clown of the mountains’, , the kea’s natural curiosity and its comical behaviour are both a blessing and a curse. Seeing a roguish kea or two hopping over to investigate the latest arrival is one of the highlights of a visit to Arthur’s Pass, but tourists are strongly advised not to feed these charismatic creatures, recently voted New Zealand’s No. 2 most popular bird.

Kea are notorious for ripping open unattended bags, for example, and for stripping the rubber seals from cars, and the more they come into contact with humans the more likely both species are to come into conflict with each other.

Indeed, a few kilometres away, at the eastern entrance to the Arthur’s Pass valley, is a life-size model of one of the many New Zealand birds to have come into conflict with us humans, and to have lost. This is the statue of an extinct giant moa, towering up, neck extended, three or so metres amongst the trees on a small hillock near the Bealey Hotel.

Even our hard-to-impress teenage daughter Poppy was amazed at the sheer size of this creature. “Imagine if they were still here,” she said. “And imagine if they came into town like the kea.”

If that were indeed the case, I for one wouldn’t be chasing moa out of the garden - even if I was fully dressed.

The plaque at the base of the monument explains that, since the sculpture was installed in the 1980s, more recent research on moa suggests that they actually stood with their heads and necks slung forward, like a modern ostrich or an emu.

Still, weighing in at over 200kg, these feathery monsters must have been an impressive sight for the earliest Maori hunters.

At the other end of the valley, past the memorial to Arthur Dudley Dobson, the first European to be guided through the region by Maori, and who bequeathed his name to the modern village, stands another impressive giant structure - the modern road viaduct, snaking its way down the Otira Gorge.

And as we stopped at the lookout on the pass proper, another kea suddenly popped out of the bush onto the rocks in front of us. Poppy was openly delighted - as much because it gave her an excuse to avoid walking up the old overgrown Otira highway as the chance to photograph this beautiful bird.

This walk is one of a number of shorter walks in or around Arthur’s Pass that are ideal for travellers who only have a short time to spare in the village. The Devil’s Punchbowl waterfall is another easily accessible not-to-be-missed attraction.

Longer (and steeper) day walks include Avalanche Peak, with spectacular views over the glaciers of Mt Rolleston. The track, which starts immediately behind the village chapel, had earlier persuaded Poppy she didn’t want to be a mountaineer when she grew up.

Facilities in the village and its surrounds include numerous motels, lodges and hostels, cafes, a shop and a petrol station. Accommodation prices begin as low as the $6 per head we paid to put up a tent at a nearby DOC campsite one night and the $90 per night for our holiday bach, booked online.

We had glorious weather the weekend we were there, although the lush surroundings clearly show it sometimes rains in Arthur’s Pass - by the bucket load. This doesn’t seem to deter the local kea, though.